Like many people with Limbic System Impairment, my process of healing was uniquely mine. I had spent so much money on doctors and treatments that by the time I heard about the Dynamic Neural Retraining System, I was tired of spending money and decided to start with the DVDs. Although attending an in-person seminar seemed like a dream, I figured if the DVDs showed signs of working and I had some extra money to spare, I would eventually go to one of the seminars. I counted down the days until the DVDs arrived. In the meantime, I scoured over all of the testimonies, which gave me so much hope.

When the DVDs arrived, I set aside a week to do nothing but devote my time to watching the DVDs and learning the steps. I remember immediately feeling so connected to Annie, even though I had never met her. I could tell that she was a compassionate person who had a true desire to help others. My dream was to meet her someday. Fortunately, I have since had the opportunity.

The DVDs gave me so much hope. Within days, I began to have a new outlook on life. Instead of feeling like I would never be well again, I looked forward to a bright and wonderful future. Planning my past memories and future visualizations became fun to me. With each day, I gained access to more and more beautiful memories. I also realized the power of using music in my memories as it brought me right back to the time when the memory actually took place. For future visualizations, I would find pictures of beautiful gardens, beaches, exotic places, or just simple little cafes that I would someday like to eat at. I would image myself being at those places and describe them in great detail.

The process was not an easy one. After two months, I had seen some improvements, however, I was not doing so well with my POPs. My POPs increased when our dishwasher flooded the downstairs part of our house. Workmen were working 12-hour days to dry out the floor, clean up mold, and replace the floors. As the floors were ripped up, more water damage was found as it was discovered that there were some plumbing issues with our home. I remember thinking, “Mold! I’ll never get better!” I took at least two months off from practicing the Dynamic Neural Retraining System due to this and soon discovered, that nothing was improving. I decided to order Annie’s book, hire a coach, and get started again with the practice.

Not everyone who does the Dynamic Neural Retraining System program will need coaching or find the community forum beneficial. However, for me, it was crucial. I needed a coach and a community to support me and hold me accountable. I needed to be reminded that I was on the right path. My limbic system had me thinking in such negative ways (POPs) for so long, that it was a process to look for what was going right rather than focus on what was not. It took several months of dedicated practice before I was considered completely healed.

How did I know I was healed? For some, there’s that one day where everything seems to fall together. However, for me, it was a gradual process. I gradually started to feel better. I gradually noticed foods were no longer bothering me and I became braver about adding them back. Soon, I was spending more time enjoying life than doing the practice. I felt guilty because I noticed I wasn’t practicing my Dynamic Neural Retraining System steps as much. In April 2015, my husband and I moved and through the process, I stopped practicing all together. Once we settled in, I debated on whether or not to resume the steps. It had been more than six months and I was feeling great! So, I did an experiment and stopped practicing. I continued to feel great! For a while, whenever I would encounter a stressful situation, I would do two 15-minute rounds just in case. However, I noticed that I was handling stress better too. It was then that I decided that I must be recovered. Within the next year, I had several defining moments. 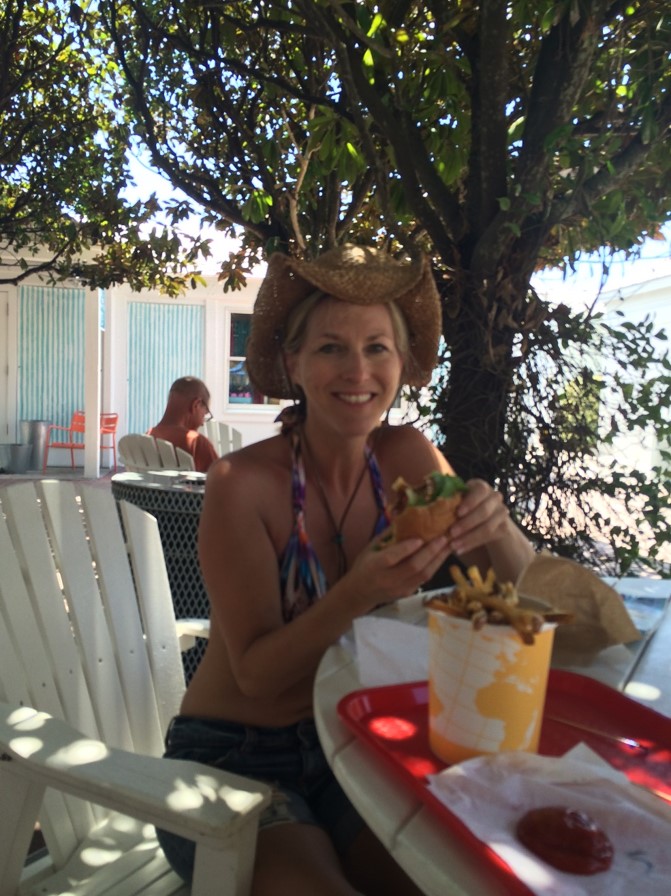 2015, Seaside, Florida – nothing felt better than being able to travel somewhere and actually not have to pack my food! Eating a burger and fries from a beachside food truck was a defining moment for me.

Interestingly, some of my future visualizations came true. There was this little pink beach cottage in Seaside, Florida that I had always wanted to stay at as well as eat from one of the quirky little food trucks that lined Highway 30A. In 2015, that visualization became a reality. I was sitting in a white Adirondack chair in the shade eating a cheeseburger while one of the songs I had used in a memory came on the radio. My husband snapped a picture of me to capture the moment. I realized that this was just how I had imagined it except even better! To this day, I still have moments like this when a future actually happens and it is always better than imagined. The brain truly is amazing!